Matthew T. Phillips is the Exxon-Calloway Fellow and an associate teaching professor in the Wake Forest University School of Business. He also serves as president-elect of the Academy of Legal Studies in Business and president of Wake Forest’s Faculty Senate.

Matthew came to Wake Forest in July of 2008 as Assistant Dean of Business and later worked in University Advancement as Executive Director of Communication Strategy while holding an appointment as Research Professor of Law. Prior to his administrative work at Wake Forest, he was an estate planning and tax lawyer in the Winston-Salem and Lake Norman areas of North Carolina. 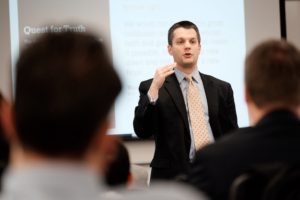 Matthew teaches courses in business law and ethics across the Business School’s undergraduate and graduate programs. He leverages a passion for innovative teaching and legal experience to engage students with the practical intersections of law and business, but also emphasizes the underlying principles that will shape managers’ interaction with law and ethical decision-making throughout their careers. He has received awards for excellence in teaching, including the “Ideas Worth Teaching” Award from the Aspen Institute in 2017, and he was named the 2015 Charles M. Hewitt Master Teacher by the Academy of Legal Studies in Business. In addition to his teaching duties, he previously served as director of the BB&T Center for the Study of Capitalism and as associate dean for the School’s working professional MBA programs in Winston-Salem and Charlotte.

Matthew received undergraduate and law degrees from Wake Forest and a Master of Divinity degree from Duke University, where he focused on the intersections of law and religion in American history. He has done additional academic work, concentrating on leadership and ethics, at the U.S. Air Force’s Air University. He is admitted to practice law before state and federal courts of North Carolina, the United States Tax Court, and the United States Supreme Court. He is certified by the North Carolina Dispute Resolution Commission as a Superior Court Mediator.

Matthew is a member of the Academy of Legal Studies in Business and its ethics section, the North Carolina Bar Association and its business and estate planning sections. As an instrument-rated private pilot, Matthew enjoys flying single-engine planes from Smith Reynolds Airport in Winston-Salem and is a pilot and legal officer holding the rank of colonel in the Civil Air Patrol (the U.S. Air Force Auxiliary).